As floods, forest fires and heat waves become more severe and frequent each year, the evidence of climate change is not a subject up for debate. Thanks to satellite telemetry and Earth Observation, we have more accurate knowledge of the potential of climate evolution. With a projected rise of the air temperature of up to 7°C at the end of the century, many species are endangered, as they cannot adapt to such quick changes.

But to preserve endangered species, we need to have as much knowledge as possible on their behaviours. A symbol of wildlife preservation is the marine turtle. There are 7 species on Earth, but only 6 of them are classified as endangered: the flatback turtle is not classified as sufficient data has not yet been gathered.

Thanks to wildlife monitoring programmes such as Argos, specialists have precise data in their hands to study species’ behaviour.

As we are not specialists of marine wildlife, we will use scientific literature results, to explore the impact of climate conditions on loggerhead turtles movements. To do so, we need to cross-explore two large data sets, which brings challenges in terms of scalability and multiple collection exploration. We will also see how ARLAS helps us solve those issues.for

To carry out this study, we will observe the movements of 54 loggerhead turtles in three main areas: the Atlantic Ocean, the Mediterranean Sea, as well as the Indian Ocean. Thanks to Copernicus’ Marine Resources platform, we will explore four climate parameters in the areas neighbouring the turtles’ trails:

For decades, the amount of data that exists in the world has been growing exponentially, to reach a projected 175 Zetabyte in 2025. To clarify, a Zetabyte is a number with 21 zeros, but it still is hard to grasp the magnitude of such big numbers. To compare with something that is easily representable, it is estimated that the oceans of Earth contain a bit over 1 Zeta-litre of water. In order to process even a slice of this data, data exploration solutions need to be scalable and withstand heavy queries.

To explore the impact of climate conditions on loggerhead turtles’ movements, we used two datasets : turtle positions from the Argos beacon of CLS and climate data from Copernicus’ Marine Resources platform.

You may also want to check out this article on data analytics of storks migration.

Unfortunately, due to the large geographical and temporal extent of our loggerhead turtles’ data, one Copernicus dataset does not suffice. To produce the final data set that we used for our study, multiple sources had to be aligned and merged. Once aligned on a common grid, the representation with ARLAS’s Network Analytics layers proved to be an effective way of displaying this raster data.

In areas with high concentrations, turtles are seen deviating from the migration path and extending their trails to forage in those waters, as can be observed below. 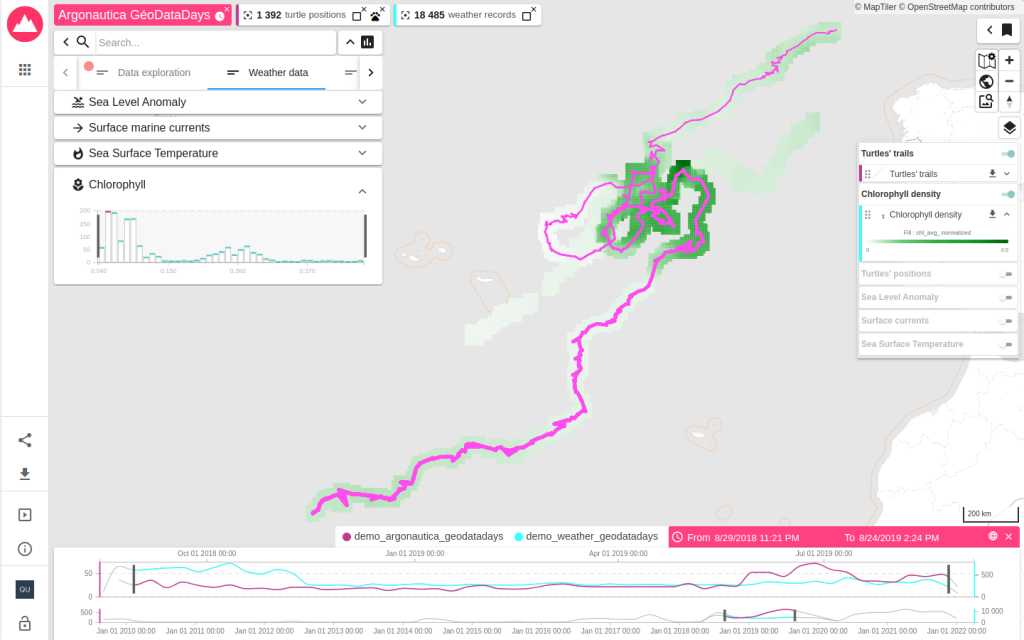 The Sea Level Anomaly is the local difference from the long-term average sea level. It can indicate unusual values for other climate conditions such as water temperatures, salinities, average monthly winds, atmospheric pressures, or coastal currents. Around these occur eddies that circle around those anomalies and induce a pumping phenomenon that will pull up nutrient-rich deeper waters that will also constitute interesting foraging grounds for turtles.

In the example below, the turtle Gloria can be seen bypassing the different anomalies that are denoted with deep red and blue colours. 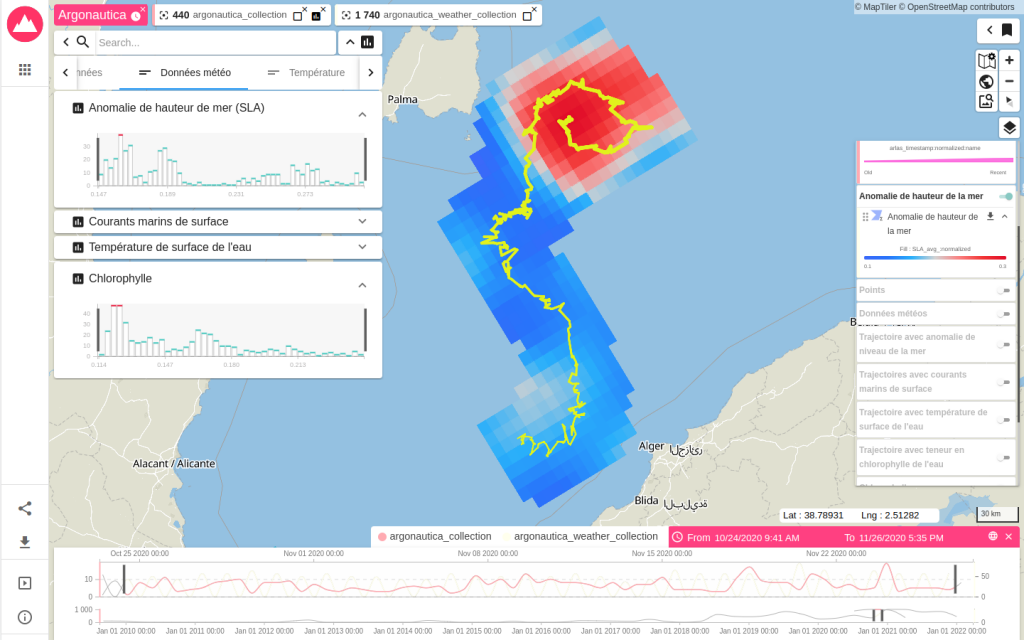 Marine currents are crucial when it comes to our oceans’ health: they help control the climate by carrying warm water from the Equator to the poles, as well as help marine wildlife. Currents carry nutrients from colder polar waters to more temperate areas, in addition to carrying spawns, younglings and adults towards their destination.

In the case of loggerhead turtles, adjuvant marine currents can help them accelerate, as seen below. As currents become stronger in the turtle Tina’s trail direction, she gains noticeable traction as shown with her trail’s colour pulling towards redder shades. 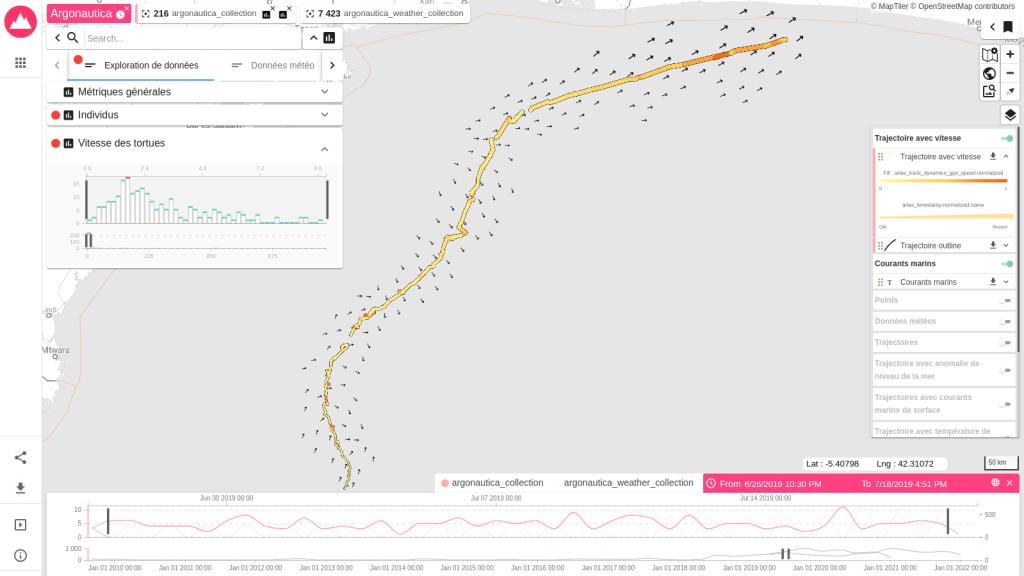 REVELATIONS FROM THE DATA

Sea turtles are cold-blooded reptiles that depend on their environment to regulate their body temperature. Due to that, they tend to live in waters between 13 and 28°C. Below 13°C their metabolism slows down and can reach a cold-stunned state where they are unable to move. At high temperatures, their metabolism accelerates. Temperature also plays a core part in the sex-balance of the species: the warmer the nesting beach’s sand temperature, the more female there will be.

With the warming of our climate, it is estimated that the coming decades will see an imbalance in the population which can have a harmful impact on sea turtles’ genetic diversity. Being able to monitor the temperature of nesting beaches as well as of the turtles’ environment can help us protect them better.

With ARLAS-Explo, we can study the evolution of the water’s temperature across multiple egg-laying seasons (June to August in the Mediterranean Sea). Over longer time periods, we could observe whether there is a change in their behaviours or habitats that could occur due to the rise of sea temperatures.

In the following ARLAS dashboard view, the turtles’ positions are represented during their egg-laying season in the Mediterranean Sea. As shown in the first graphs, most of the temperature variations are due to the evolution of the temperature across this period. However, the swimlanes in the second set of graphs could help us track along the years the variation in temperature. Here, they are limited to around less than a degree in average, with variations that can be linked to average temperature records. 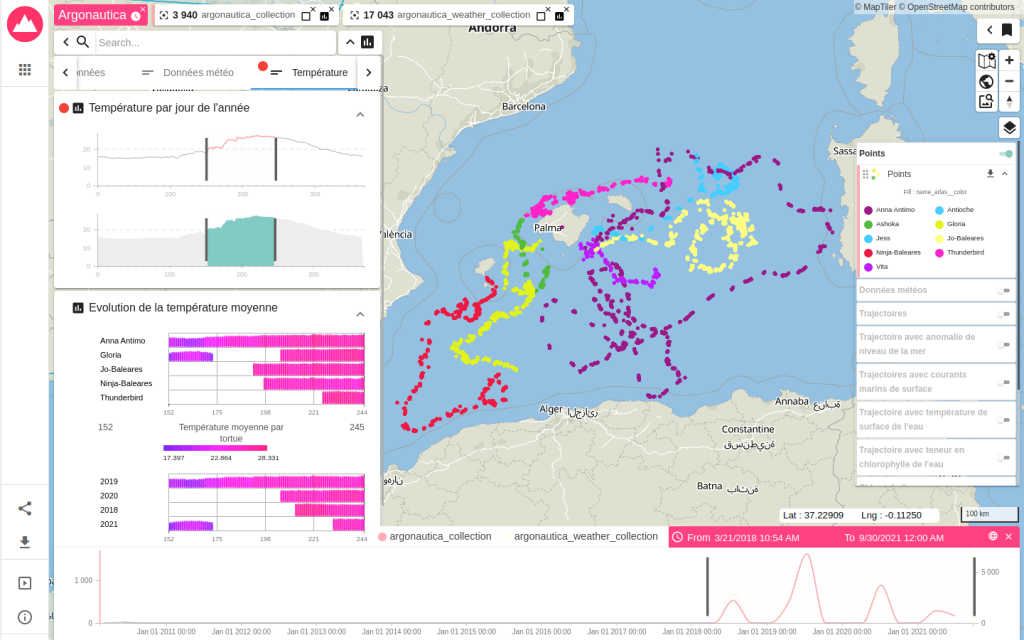 All efforts towards wildlife monitoring are expected to help gain more knowledge on their behaviours as well as protect them better.

If you are working in wildlife observation, monitoring or studies, check out our demo to get a glimpse of ARLAS at work on loggerhead turtles and climate data.